well this week was full of hard work. Needless to say, I was very exhausted by the time it got over. I guess I could compare it to the way I would feel after a basketball tourney, just beat. My body hurt and I was drained honestly. That is missionary work though. It takes everything. Also, hard works brings miracles so thats how its got to be.


Hmmm.....to start off this week it was raining like crazy. I mean, like crazy. Every day it would come down so hard. We are in that season though where it rains just about every day. The first couple days I was getting so soaked and my shoes were getting destroyed from the roads. For those who dont already know, the roads are just dirt so they get full of water and mud and all that good stuff. Walking all day and having wet and muddy shoes all day doesnt make it too fun so I decided to go and buy some rain boots. They are sweet. My feet were so dry the rest of the week because of my rain boots. I didnt think I would ever get to this point where I would buy rain boots but it was necessary. Now I can walk everywhere and not having to worry about where I walk.


We changed our clothes lady this week because she wasnt washing it for us this week so my comp and I had to use the same clothes for 4 days straight and for the rain our clothes couldnt dry. By that fourth day our shirts were pretty yellow. It was gross. It felt so good to get fresh washed clothes haha but now we are all good with our new lady that is doing it. She even ironed our clothes this week which not very many people do. My shirts look so nice, I was very impressed. haha


Something really sad happened this week. We went to our recent converts house. The mom was a member and the kids were baptised about 4 months ago. We got there and the mom wasnt there. We asked the 3 kids where she was and all they said is that she left. So we went to the grandmas house right in front of the house and asked what happened and she told us that the mom just ran off with some other guy and left the kids. I honestly felt so bad for those 3 little kids. Their mom just left them with nothing. It was so sad. I asked myself. How could a mom do that? I dont understand it. Sometimes I ask why the Lord lets things like that happen. I just know that God has a plan for everything.


On Sunday, we brought a family to church. Everyone went but the son and so we took the son in the afternoon to the Miskito meeting. We put him on the bus and we walked to the church because the bus was super full and when we got there we couldnt find him and no one knew where he was. I was so scared because the mom trusted us with the kid. We went back to his house and he wasnt there and we had no idea where he was. I was so stressed out and we were looking and looking and then about 30 mins after the church got over we got a call from the mom and she told us that he just showed up to the house. After everything I was just so relieved. I was so stressed for that. Im glad he is all good though. After that, I was just done and ready to go to bed hahaha. Sundays are crazy here. The plan never goes as planned, never. 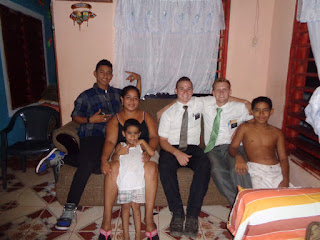 All in all. I learned something very beautiful this week. I learned about the love. Love is so important for us as misionaries. If we dont love the people here we are never going to help them feel the love of the Savior. Sometimes its hard for me to love and I get frustrated with the people and all the stuff we go through as missionaries. I realized this week that for me, if the people that helped me come out on a mission wouldnt have shown me love, i probably wouldnt be here by now. So i need to pay it forward and give that same love that I have felt to the people here.


Well, thats what I got for you guys this week! I got a picture too of me and my rain boots! :) 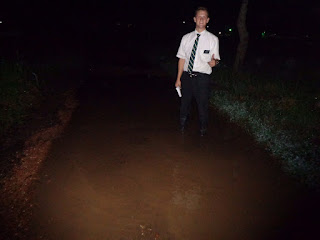 
Elder Sherle
Posted by Unknown at 2:57 PM No comments:

Hey fam!! Whats up! Hope everyone is doing good!
This week was good. It went by really fast. Like every week, it was full of its ups and downs but all in all i guess it was a good week.
President and Sister Collado came over to Puerto this week. There were here for Saturday and they left today. President came to do a bunch of number stuff and to do interviews and to help out the leaders and stuff here. It was good. I had a good interview with him. One cool thing that happened is Saturday night we were waiting for President because he was in a meeting with the leaders so it was a couple of us missionaries and Sister Collado. What happened was her and I were able to have an actual normal conversation for about and hour and a half. It was awesome. I actually got to know her a little bit as a person and get to know how she was called to the mission and the whole process of their call. It was so cool to hear all the things they have been able to do. I thought it was cool that we got to have that conversation because that was the first time in my mission that that has happened to me and now I feel like I actually know a little bit better my mission mom. I got a lot of respect for her.
We had a girl named Ailing that was suppost to get baptised on Saturday. She went to conference and everything and she was all ready to go until the last minute and she backed out. Her family told us that she went to the hospital on Friday and then on Saturday she left her house early in the morning so we never found her. It was pretty annoying. I dont really understand why that happens. At the end of it all, i learned something from it. Every person in the world has their agency to act for themselves. We as missionaries are just the guides to the truth. We testify and invite people to act so that they might know what to do to be saved but we cant force anyone to do anything. It is a great gift that God has given us to be able to choose for ourselves and to make our own decisions and those decisions decide where we go after this life and for eternity. So i just got to stay positive and keep looking to help as many people as I can know what to do to be able to live with God again.
I feel so blessed to have this gospel in my life. It has helped me so much. It really has opened my eyes to see the bigger picture of things and to see what my purpose here in life. I am so grateful for the atonement so that we can get back up when we fall and move on and be better  people.
Well thats what i got for you guys this week! I hope you liked it. My camera is still broke. I hope Elder Lainez can get it fixed soon so I can send you guys some pics to make my letters cooler! haha
I love you all have a great week!!!


Elder Sherle
Posted by Unknown at 9:57 AM No comments:

Hey fammmmm! It was a great week here in Puerto Cabezas.


Now that I am in a new area I spent this week trying to get to know everyone and get to know the new area. I love the new area. It is a lot bigger than my last area. From what I have noticed, this new area is a lot more spanish than miskito. It is more closer to the main part of town so everyone speaks spanish really well. My comp is awesome. We are working good together.


The branch I am in is really strong. We have a lot of returned missionaries in it and they are a lot of strong members. One thing that I have noticed in the branch is that the members are a lot closer than the other branches that I have worked in. There is more love. I already feel comfortable with the members. The liders know who are investigadors are and everything. That is something that almost never happens. I am going to love being in this branch.


The highlight of my week was General Conference of course. It was awesome. I have honestly come to love general conference as I have actually watched them on my mission because of the spirit that the profet and the apostles have with them. There were a lot of great talks and I was able to learn a lot about how to be a better follower of Jesus Christ and how I can love the Lord more in my life. I am so grateful for living Profets and Apostles that talk with the Lord that can guide us through life that we might be able to stay on the straight and narrow paths. They help us know the boundaries in life that protect us from danger and show us how to find the happiness and purpose of life.


President Uchdorf said "Exaltation is the goal, Discipleship is the journey". It is so true. Our goal in life is to be able to live with God once again and to be able to enjoy all the blessing of Him and we need to be disciples of the Lord to be able to reach our goal.


Elder Oaks said "The future is as bright as your faith". I really liked that because for our faith God can work miracles in our life but if we dont have faith and we dont believe, our future wont be so bright and God wont be able to work so many miracles in our lifes.


And there are so many more.


I am so grateful for the many things I have learned here and without a doubt I know that the Lord lives and he wants us to be happy. For that reason, he has given us guidelines and his gospel to be able to follow the path that leads back to him. He loves us so much.


I hope everyone was able to get something out of Conference. I love you guys and hope you guys have a great week this week!


Elder Sherle
Posted by Unknown at 9:51 AM No comments: